The delay on this reflection

The fastidious reader will notice that I am quite delayed on finishing this reflection. My apologies. I reflected on this fact here and here. Hopefully I will be quicker with these going forward.

There’s so much that I missed in the first reading/watching, especially all of his references and sources. For example, I LOVED the interview with Will Wright that he linked to in Learnable Programming – it’s making me seriously consider creating video games like Nicky Case does.

This has come along really nicely! I’m honestly a little surprised how much fun I had building this page. What’s funny is that I had the idea for making this page in my last research reflection time and came up with the basic structure for doing it locally, statically instead of dyanmically from github via AJAX on each page load. 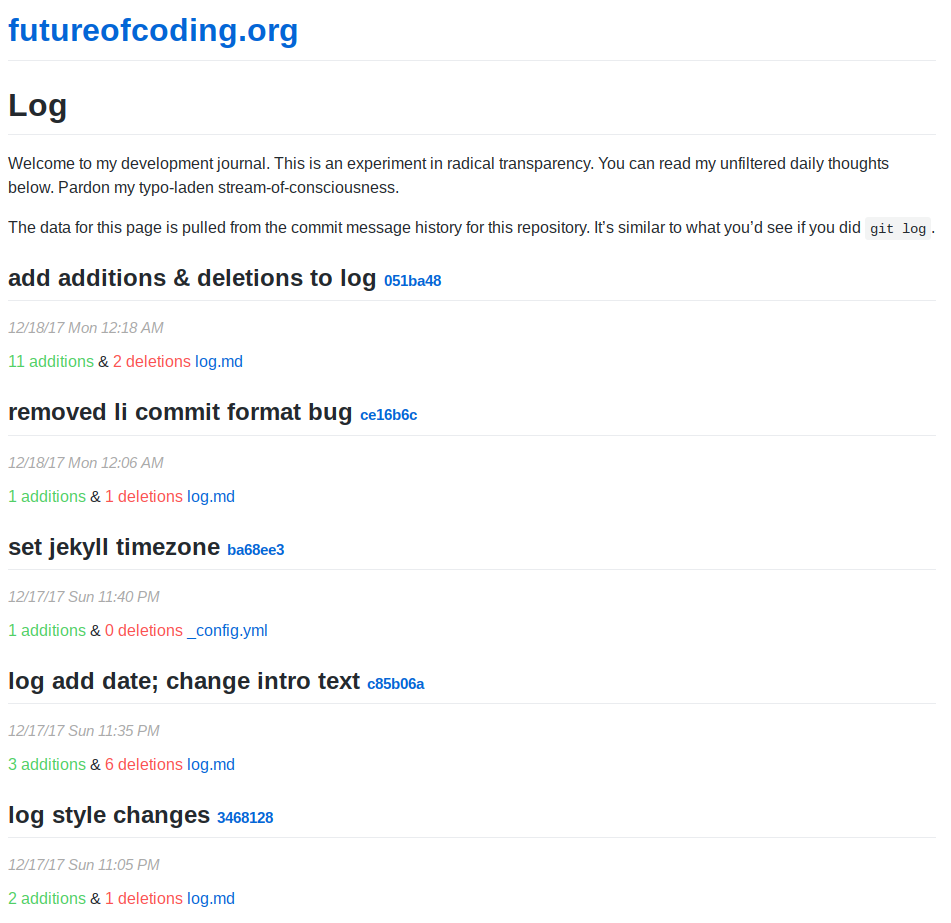 I learned a bunch about Jeykll, github pages’s static site generator, in order to build this. It was fun. Also hilarious how long it’s taken me – years! – to get to know how Jeykll works given that I use it for all of my projects.

For example, in order to iterate on this without having to push to github each time, I needed to learn how to compile a jekyll site locally with jeykll serve but then also not include that in the project via .gitignore.

Clearing up space on c9

Clearly the Cloud9 space detectors weren’t working properly before because I didn’t get any warnings about space on my 2GB machine, but I had 20GB of data on it! I first moved up to the 10GB machine but still needed to delete 10GB. I deleted a lot of projects I don’t use anymore first. Then I figured out how to use git sparse to clean up this repo a bit. I tried using git large file system but 1) it solves a different problem and 2) it doesn’t work with Github Pages. This was a bit annoying, and took an hour or two.

I recently figured out that my “research recap” episodes are a waste of time. I will move to a bi-weekly release schedule, and only do interview episodes. I explained this new structure in the episode I released today, Dec 29, 2017, in the housekeeping section.

I’ve only gotten a dozen or so hours of work in since I’ve come home. It’s partially a vacation so that’s OK, but I would’ve prefered a bit more time to focus.

Let’s say I have 4 solid work days before leaving for Dynamicland. What are the most important things to do?

I’d say continuing the BV Deep Dive is pretty darn useful. The more of Brett and his sources, such as Edward Tufte – just bought one of his books – in my head, the better I will be able to absorb and communicate while there. I think I may be able to even finish this deep dive if I really put my head down and don’t get distracted by emails and whatnot.

However, I will also want to set aside time next week to organize my trip out west, including seeing friends and figuring out my birthday on the 21st. 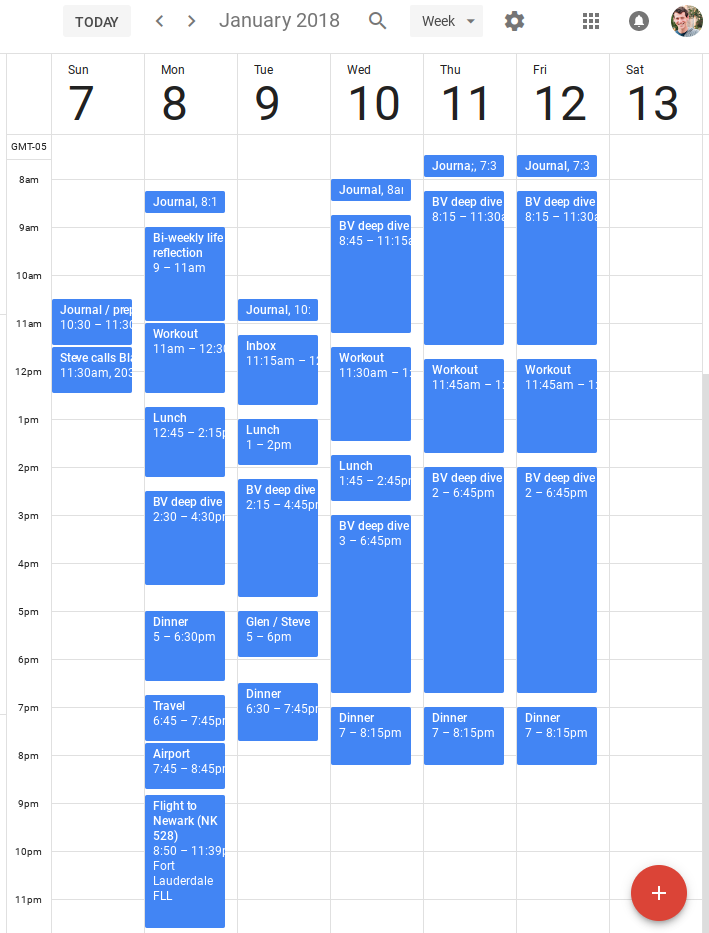 This is my rough plan for the week. In the past, I treated blocks of time as un-deletable. This is useful because it helps make time more concrete. If something would take 5 hours, I can’t change that, I can only move that block of time sooner or later. However this system doesn’t quite work perfectly because (1) sometimes things take longer or shorter than you’d expect, (2) sometimes you decide not to do something anymore (which would be deleting it), (3) it’s difficult in google calendar to move events to the following week.

So as a stop gap measure, I will allow myself to decrease the time of some blocks, or even delete them, as needed. However I will keep the above picture in this journal so that I can see what I originally planned, and will then be able to compare it with what actually happens next week.

Given all that, I think it’s realisitic to assume I’ll get 15 hours (possibly as much as 25 if I’m really focused) of BV deep dive in next week, which I think will be more than enough to be prepared for my visit. However, I also want to leave time for odds and ends to show up, as well as for a potential podcast interview.

While I’m there, my intention is to write in this journal at least every day. I’d also love to add videos and pictures here, as well as do some fun tweets. It might be fun and useful for me to write piece on the space so as to explain why I’m so excited about it. I’ve also thought about writing a piece entitled “Bret Victor Fanboys” after chatting with Jan Paul Posma and Stefan Lesser, but not sure how that would go over.

There are a number of other things on my mind that require focused thought, which requires time, which I will not have until after going to Dynamicland. These include: