HyperCard is a direct manipulation, WYSIWYG graphical programming environment. It's scripting language, HyperTalk, is object-oriented, event-driven, and has English-like syntax. Inspired by SmallTalk, HyperCard is a medium that blurs the line between creating and using computer programs. Created by Bill Atkinson (after an LSD trip) and distributed free with every Mac until 1998, HyperCard kindled a love for programming in a generation. The first successful hypermedia system, it directly inspired HTTP, JavaScript, and wikis.

The above video (8 min) creates a simple todo list application in ViperCard, a modern re-implementation of HyperCard for the web. It demonstrates:

Note: vipercard.net is down at the time of writing. I was able to get it mostly working by following the build instructions on this version of the codebase. This is still the quickest way to get up and running with something like HyperCard that I found.

HyperCard users can move fluidly between browsing, typing, painting, authoring, and scripting a program. Hypercard saves all changes automatically, so lower-power levels are useful for when you don't want to mess up a friend's stack. 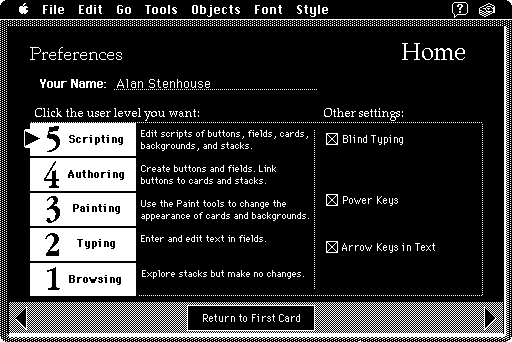 Trying to bring programming to "the rest of us", HyperTalk is renowned for its English-like syntax. A common example of HyperTalk's readability is the line: put the first word of the third line of field "hello" into field "goodbye". The numbers 1 and 2 can be referenced with one and two or first and second.