Glitch is a collaborative online IDE for creating NodeJS apps. It also features a community for exploring and remixing others' creations. There's no deploy button: the tool reloads itself every few keystrokes. It was founded by Fog Creek Software (Trello, StackOverflow) in 2017 and raised $30M.

The above video produces a simple webpage that counts the number of times it's been loaded. It demonstrates:

Built on top of git, Glitch's visual version control tries to make it easier for beginners to rollback to earlier versions. It commits code every couple changes. It doesn't seem to handle forks. I found it confusing and would prefer either Google-docs-style revision history or a Github-style branching diagram.

You can highlight a piece of code and ask for help. In my experience this feature was more trouble than it was worth, possibly because they don't have a critical mass of people using it.

I can imagine this would be amazing for hackathons or other forms of close collaboration on a small project. However, I worry about larger projects with 2+ people working on different parts of a NodeJS app at the same time.

Easily search npm and add to package.json with one click: 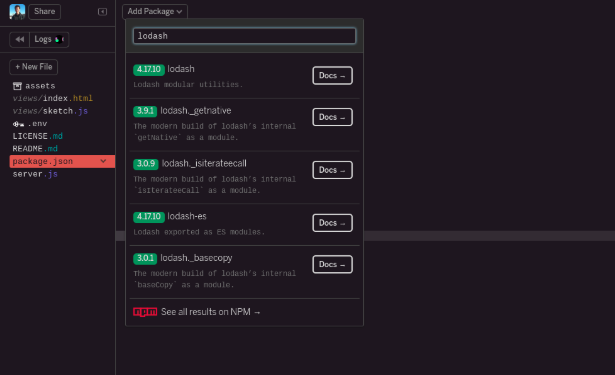 During its beta period, Glitch is free for all users and teams. They are in financial partnerships with tech company libraries, like Google's Tensorflow, to promote that library's use through starter projects on Glitch.

Past wishes that were granted: